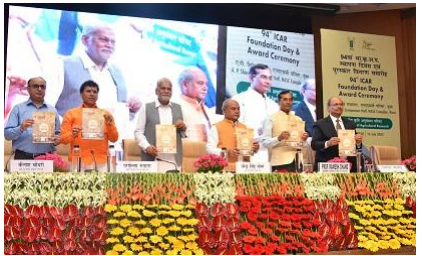 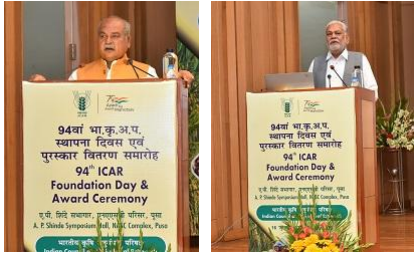 In response to the clarion call of the Prime Minister Shri Narendra Modi for doubling Farmers’ income, the
income of millions of farmers has more than doubled with the consistent efforts of the Ministry of
Agriculture & Farmers’ Welfare / ICAR, State Governments and Farmers. As a part of the “Bharat Ka
Amrut Mahotsav” to commemorate 75 Years of India’s Independence, the Union Minister, Shri Tomar
released E-Compilation of the Success Stories of 75,000 such successful Farmers who have more than
doubled their income. He also released the State-wise summary of these successful farmers. Shri Tomar
congratulated the ICAR and Krishi Vigyan Kendras for the Compilation. He exuded his confidence that
this Compilation will motivate and inspire more and more farmers to raise their income leveraging the
various Schemes and initiatives of the Central Government. The Union Minister also virtually interacted
with the various successful farmers during the occasion.

Shri Tomar stressed that although the country has achieved self-reliance in the various crops’
production; but the scientists should be ready to face the newer challenges that may occur in the due
course of time.
The Union Minister congratulated the Council’s Scientists for their dedication that has made the
country to be self-reliant on the various fronts of the agricultural arena.
Shri Tomar urged ICAR to celebrate the ICAR Foundation Day as “Sankalp Diwas”. Shri Tomar
exhorted the Scientists of ICAR to set the various goals / targets for the benefits of the agricultural
sector in general and farmers in particular and to take it as “Sankalp” to be fulfilled during the ensuing
Year

Shri Parshottam Rupala, Union Minister of Fisheries, Animal Husbandry & Dairying urged the Council to
gear-up and work for compiling and documenting the Council’s various unparalleled achievements
made till date. The need for making the Drones available to the farmers through the Council’s Custom
Hiring Centres was accentuated by the Union Minister. Shri Rupala suggested the Council to
disseminate the success stories of Doubling the Farmers’ Income to the various farming communities
to encourage them in achieving the same in their lives too.
The Guest of Honor, Shri Kailash Choudhary, Union Minister of State for Agriculture & Farmers’ Welfare
stated that the Farmers’ Producers’ Organizations are the milestones that enable the farmers to sell
their products on a large scale at better prices. The Minister said that it is the hard work of the Council
and its Scientists that a large number of farmers have doubled their income as has been envisioned by
the Hon’ble Prime Minister, Shri Narendra Modi. He also stressed on the perfect utilization of the Drone
Technology by the farmers that have helped the farming community on a large scale. Attracting the
farming community to practice Natural Farming was emphasized in his address. 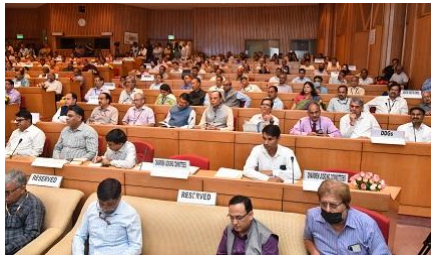 Prof. Ramesh Chand, Member, NITI Aayog also applauded the various landmarks achieved by the
Council in the development of various technologies for the agricultural and farming communities.
Continuing its tradition to incentivize the individual Employees & Teams for the outstanding
performances across the Organizations and make them more efficient, responsive & productive apart
from improving their levels of job satisfaction, this Year, the Union Minister gave away 15 Awards in 4
major Categories. The Categories included National Award of Excellence for Agricultural Institutions,
National Award for Excellence in Agricultural Research, National Award for Application of Agricultural
Technologies and National Award for Innovations & Technology Development by the Farmers.
This Year, the ICAR selected 92 Awardees under 15 different Awards including 4 Institutions, 1 All
India Coordinated Research Project, 4 Krishi Vigyan Kendras, 67 Scientists and 11 Farmers of whom 8
were Women Scientists and Farmers.
The Chief Guest and the dignitaries released the various ICAR Publications and Technologies on the
occasion.
Dr. Trilochan Mohapatra, Secretary (DARE) & Director General (ICAR) highlighted the Council’s
achievements made during the last Year.
The Ministers / Members of Parliament, Members of the ICAR Governing Body, Senior Officials of ICAR
Head Quarters, Directors of ICAR Institutes, Scientists and Vice-Chancellors of State Agricultural
Universities also virtually participated in the event.