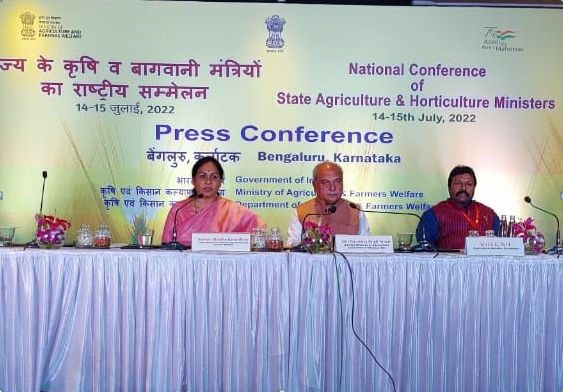 The two-day National Conference of Agriculture and Horticulture Ministers of the States, organized by the Union Ministry of Agriculture and Farmers Welfare in coordination with the Government of Karnataka, concluded successfully in Bengaluru today. On the basis of extensive deliberations in various sessions during the conference, the States agreed to increase their contribution in areas such as Natural Farming, Digital Agriculture, Crop Insurance, promotion of Farmer Producer Organizations (FPOs) and Agricultural Infrastructure Fund towards achieving the Central Government’s efforts for Sustainable Agriculture Development, which will be a concrete step towards achieving the goal of Prime Minister Shri Narendra Modi’s ‘AatmaNirbhar Bharat’ (self-reliant India).

Appressing a press conference on the occasion, the Union Minister for Agriculture and Farmers Welfare, Shri Narendra Singh Tomar said that there is tremendous potential in the Agriculture sector. There is a need to focus on Innovation and technological advancements to address the emerging challenges in this sector and work towards the welfare of small farmers. He said that compared to other sectors, Agriculture performed positively during the Covid pandemic due to specific interventions of the Central Government such as the uninterrupted relaxation given to agricultural works and running Kisan Rail benefitted the Agriculture sector and farmers. Shri Tomar emphasized that there is a need to focus our attention towards better implementation of the policies and programs of the Government of India in coordination with the State Governments. This includes effective implementation of the Digital Agriculture Mission, promotion of FPOs, development of better trade mechanism of agricultural produce through e-NAM, making best use of PM Kisan Samman Nidhi and Agriculture Infrastructure Fund for the development of Infrastructure in rural areas. He said that the States need to focus on Crop Diversification keeping in view the demand for high value crops to enable increase in the farmers income. On this occasion, the Union Minister of State for Agriculture and Farmers Welfare, Ms. Shobha Karandlaje and the Agriculture Minister of Karnataka, Shri B.C. Patil were present.

During the two-day conference, discussions were held with the States on important topics for the overall development of Agriculture in the country. Consultations held with the State Agriculture and Horticulture Ministers and senior Agriculture officers will facilitate the Central Government to develop a roadmap and smooth action plan for effective implementation of all the schemes in the interest of the farming community. The conference also deliberated upon the International Year of Millets – 2023 to be observed in the next year. Keeping in view the importance of Nutritious Cereals, the States agreed to increase their production and area, as well as promote the processing, value addition and marketing of nutritious cereals, taking all possible steps along with the Central Government.